The ultimate guide to streaming in Spanish: Find Latino sports, news and TV (3232)

For around $40, these devices can drastically improve your streaming experience through voice search, easy-to-navigate interfaces and 4K support. 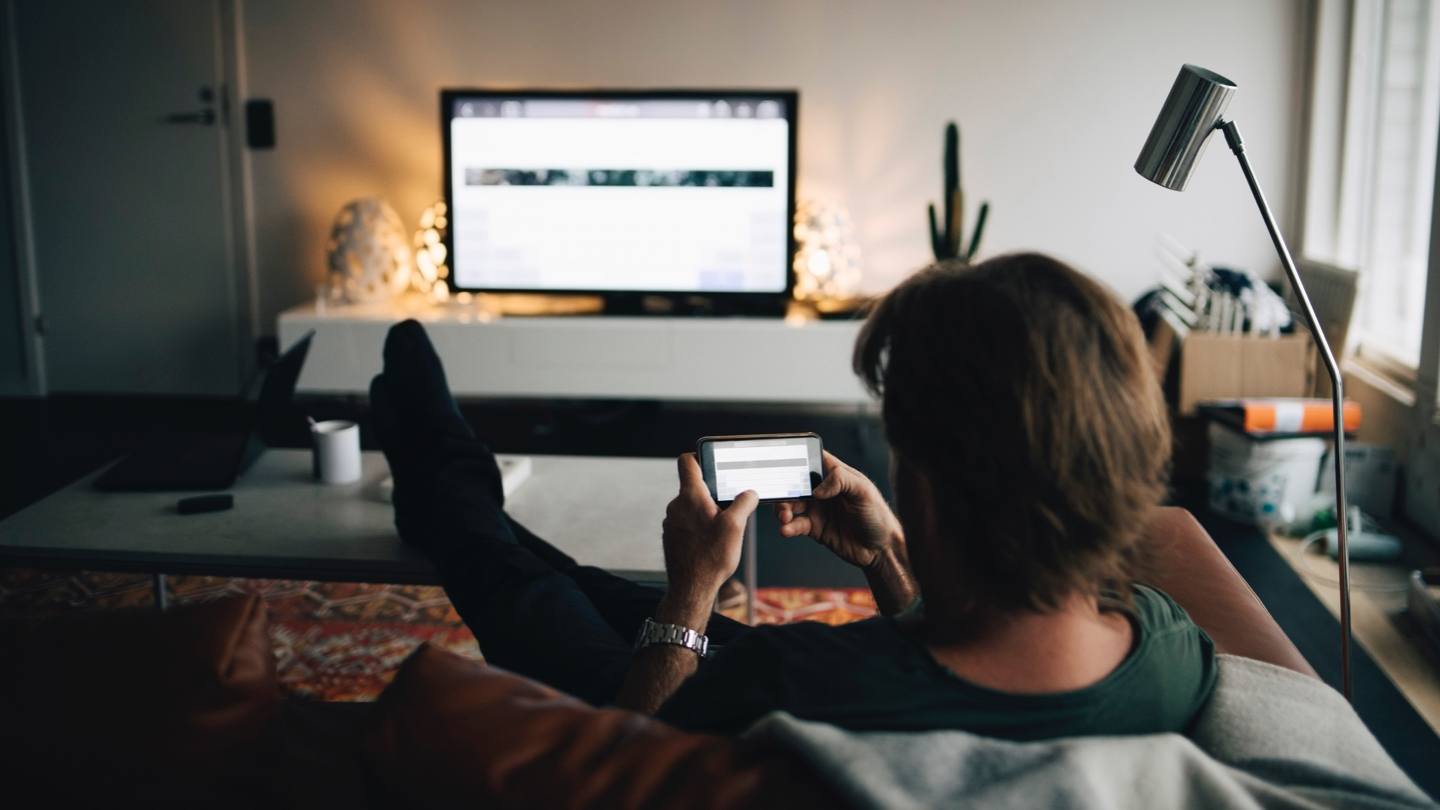 The best streaming device for most people comes down to a few key factors: how easy it is to use, how many streaming apps it works with and whether it can stream movies and shows in 4K Ultra HD.

The most popular option for streaming TV is still smart TVs — around 31% of Americans just use the apps built into their TV. But smart TVs present their own drawbacks. You might not be able to use all the streaming services you want, for instance, and they may not come with features like voice control or the ability to search for titles across all your apps.

That’s where a dedicated streaming device can take your setup to the next level. These typically plug into your TV’s HDMI port and give you access to just about every streaming service around. In this guide, we’ll walk you through the four best streaming devices — Amazon Fire TV Stick, Roku, Google Chromecast and Apple TV — and help you decide which one is right for your situation.

More than any other product, Roku has become synonymous with streaming devices. And that’s for a good reason — it’s the most user-friendly gateway into the streaming world.

Each of Roku’s six models is controlled by a basic remote. It has all the essential buttons — play/pause, rewind, fast forward — plus four at the bottom that will take you directly to services like Netflix and Hulu. (The apps that come pre-programmed vary depending on the model of Roku.)

And unlike Amazon and YouTube, it’s not directly competing with any major streaming services, so there aren’t any important apps missing from Roku’s platform. No matter what services you subscribe to, you’ll be able to get them on Roku. It also has a sizable library of free movies and TV shows in its own Roku Channel.

That said, Roku’s friendliness for beginners does have a bit of a downside. Some users might find Roku’s interface to be unnecessarily cumbersome, requiring a few extra clicks to get to what they want. A good chunk of real estate is given to ads, and unlike the Fire TV Stick, your recently-watched programs don’t appear on the home screen.

Roku also provides a ton of options. Want 4K, voice control and headphones that plug into your remote? Go with the Roku Ultra. Don’t need any of the bonus features? The Express will work just fine. To find the right Roku model for your situation, we recommend using the “Compare Products” feature on Roku’s site.

There’s one other perk Roku users get: access to the Roku Channel. It’s one of the best free streaming services around, and currently has more than 1,500 movies and shows Roku users can watch for free.

How does Roku work?

Who is Roku best for?

Roku is one of the best streaming devices for beginners, or for those who want access to the most streaming apps. We think it’s a little more clunky to use than the Fire TV Stick, but that’s mostly a matter of personal preference. The Premiere is also the cheapest device that streams in 4K.

Amazon produces some of the most affordable and easy-to-navigate TV streaming devices around. All the apps and movies or TV shows you’ve watched most recently appear in the top row of the screen, so it never takes more than a couple clicks to resume watching.

It’s also the best option for viewers looking for a cheap way to stream movies and shows in 4K. The Fire TV Stick 4K costs just $50, and is the only streaming device that supports every High Dynamic Range (HDR) format: HDR, HDR 10, HDR10+, HLG and Dolby Vision. The Roku Premiere supports 4K for $10 less, but it only supports HDR10. If you have a TV that can play Dolby Vision HDR, you won’t be able to take advantage of it with a Roku.

The Alexa voice control on the Fire TV Sticks works beautifully, too. No matter where you are in the device, you can give simple commands like “pause” or “rewind” by holding down the microphone on the remote. It’s especially useful when you want to search for a specific title — instead of choosing each letter one at a time from the screen, you can simply speak into the remote.

Searching for a title brings up all of your options for watching something, too. If you want to watch Parasite, for example, the Fire TV Stick will show you that it’s part of your Hulu subscription before you pay to rent it.

How does the Fire TV Stick work?

Amazon’s Fire TV Sticks plug into your TV’s HDMI port. When you flip over to that HDMI input on your TV, you’re able to control the streaming device with its remote. Within the device, you simply download the streaming apps — like Netflix or Hulu — that you want to watch.

Who is the Fire TV Stick best for?

The Fire TV Stick will work great for most people. If you want to control your streaming device through a remote instead of your phone (without paying a fortune), the choice essentially comes down to Roku or Amazon.

We liked the interface on the Fire TV Sticks  — it took a little less clicking around to get where we wanted than Roku — but this ultimately comes down to personal preference. Amazon does prioritize its Prime Video content ahead of its competitors, so if you’d like a more agnostic streaming device, go with Roku.

Google Chromecast: Best for casting your phone to your TV

Unlike Roku and Amazon’s Fire TV Stick, Chromecast doesn’t have a remote. Instead, you control the device through your phone, tablet or laptop. This can be a pro or con depending on the user.

On the positive side, this allows you to “cast” your phone onto your TV — an easy way to share photos or videos with the entire room. Without a remote, you also have one less gadget cluttering up the coffee table.

Unfortunately, this also means you’ll have to download every streaming app you want to use directly to your phone or tablet, which takes up valuable storage space. You won’t have one central home page to browse, either, and Chromecast doesn’t offer a way to search for a title across all of your apps.

That doesn’t mean you’ll have to keep Netflix open the entire time you’re watching it. Chromecast plays apps in the background and lets you browse your phone as you normally would. If you use Google Photos, you can also use Chromecast in Ambient mode.

How does Chromecast work?

Chromecast plugs into your HDMI port, but unlike Roku and Amazon, it doesn’t provide a remote that controls the device. Instead, you download apps like Netflix and Hulu to your phone, tablet or laptop, and mirror the device to your TV screen.

That doesn’t mean you won’t be able to use your phone while you’re watching Netflix. Once you cast an app to the TV, it works in the background, so you’re free to scroll on your phone and watch TV at the same time.

Who is Chromecast best for?

Chromecast is one of the best streaming devices for users who want something that can be integrated into their entire technology ecosystem. If viewing your smartphone on your TV sounds appealing, it’s worth checking out Chromecast. That said, it might be a little frustrating for beginners, as there’s no familiar remote or homepage to fall back on.

Apple TV is by far the most expensive of the major TV streaming devices. Its HD model is pricey enough, and if you want to stream in 4K, you’ll have to pay even more. Compared to Roku’s 4K streamer, that difference can be startling.

That said, you do get an exceptional product for that price. With an advanced A10X Fusion processor, the Apple TV has some of the fastest hardware around. That means when you click a button on the Apple TV remote, you see the result instantly on your TV instead of the half second that the Roku and Fire TV Stick take.

Apple TV’s remote is also the only one with a touch surface. You can swipe across it and jump through a dozen Netflix titles in an instant, whereas the Roku and Fire TV Stick would both require 12 individual clicks. This is a huge time saver when it comes to typing out things like usernames and passwords.

The main reason most people will opt for an Apple TV, though, is to keep all of your devices in the Apple ecosystem. It’s a breeze to mirror your iPhone or iPad onto Apple TV, and you can even control Airplay-enabled smart devices from Apple TV’s remote.

How does it work?

Like the other devices on this list, Apple TV connects to your TV through an HDMI cable. It’s a little bulkier — unlike streaming “sticks” from Roku and Amazon, Apple TV will need to sit somewhere on your TV setup — but its sleek black exterior should help it blend in.

Who is it for?

Apple devotees, plain and simple. If you’re not set on keeping all of your devices under the Apple umbrella, you probably don’t need to shell out so much for a streaming device. Setting price aside, we do think Apple TV is the best streaming device out there. But the price disparity is a lot to put aside.